Although not directly relevant to the normal topics of this blog, I need to share this.  I recently learned of my former boss’s passing.  Architect Frederic Schwartz was a true visionary and quite an inspiration for my 19-year-self, fresh out of my first year of architecture school and with a whole new set of windows flung open to the world.  I will have to make a trip to the Whitehall Ferry Terminal, and perhaps a day at the ballpark on Staten Island in your honor.  And when I arrive in California later this summer, I will plant something special for you at UC Berkeley–they were indeed lucky to welcome you when you arrived there in 1969.  RIP Fred.

The forests of my former balconies

This article mentions a book by one of my former Tulane professors, Carey Clouse.  I fully intend of purchasing this book–urban farming is such a fascinating concept to me.  Perhaps because I lived in New Orleans for so long, it seems like a no-brainer–what with the long growing season and open space–but I don’t see why anyone with a balcony doesn’t have at least one fruit tree and a stockpile of enough tomatoes and basil for caprese salads all summer.  This is obviously a rose-colored point of view, seeing as winter vegetables and grains and such take up a lot of space and aren’t as sexy (in my opinion!) as a potted neighborhood of peppers, but I know it is doable.  If I could keep plants alive in a dorm, a kitchen window, a basement, a porch, and a sagging balcony, surely the rooftops of skyscrapers could have more than just swanky bars and swimming pools.  Perhaps the pools and gardens could even coexist.

I am just free styling these thoughts right now.  This is not a highly edited post.  But seriously, check out ASLA’s article.  AND BUY PROFESSOR CLOUSE’S BOOK!

I fucking love the Faubourg Marigny. Crazy cactus people, the lot of you.

Y’all are my kinda freaks. 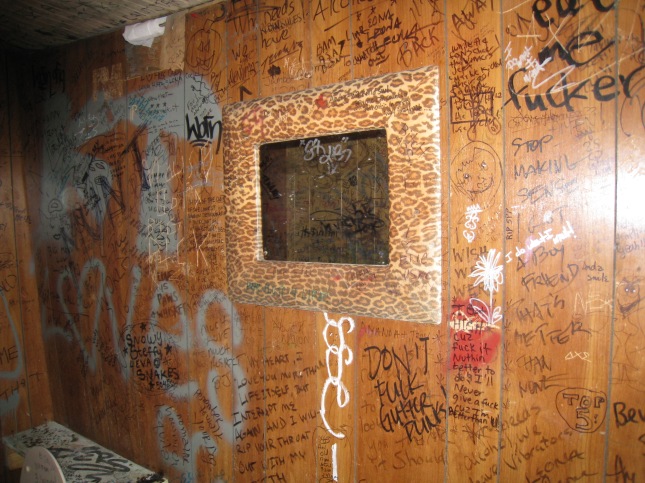 There are many reasons why Mick Jagger called Snake and Jake‘s his favorite bar in America. I like to think the ladies’ room bathroom mirror might please Bowie as well.

“How About A Nice Tall Glass of Chill the Fuck Out?”

This is worth reblogging.  “Serves 1 but invite a fucking friend, no need to drink alone”

Oh Thug, you actually make a good point here.  And a good fucking cocktail, too.  Time to get a new bottle of the ol’ Kickin’ Chicken and some Gosling’s–by far the best ginger beer of them all.  Hell-o summertime in New Orleans–there is actually something magical about termites and christmas lights and latenight porch sitting with your best friend amidst night-blooming jasmine fumes.  Honestly, that shit smells so good, sometimes I wonder if it’s gonna give me cancer.  But whatever ’cause it also makes the aforementioned termites almost seem like baby fairies.  Almost.

Before I go a step further in this venture, I should probably take a moment to explain the curious nomenclature of this blog.

If, like myself, you’ve ever had the pleasure of paying rent to a slumlord who does not accept personal checks, you may be familiar with the feeling of gravity which goes along with holding several hundred-dollar bills in your hand as you exit the bank and proceed to mutter things in broken Latin when the Claiborne bus-stop bum starts giving you that look like he’s fixing to engage you in bum-versation.  And then that feeling of blissful relief once you’ve crossed your slummy apartment’s threshold and locked the door before your creepy neighbor can ask you for the umpteenth time to come drink coffee in his kitchen.

At which point you proceed to throw that fucking wad of B’s in the air like you just don’t care.  And you really don’t.  You just fucking made it rain Benjamins, no big deal.  At least until one of the bills alights under the stove, and it’s a whole involved deal and you now have to move the damn stove and come to terms with a dead cockroach and some petrified spaghetti or, like, the previous tenant’s missing retainer or some other grisly reminder of Life Besides You in your comfy little slummy studio, anyway.  By the time you retrieve the escaped bill, it’s almost like you just found it haphazardly amidst the rubble of things the landlord’s alleged cleaning service missed.  A casual benjamin, so to speak.

Maybe not as casual as, say, the benjamins with which Jack Nicholson wraps his cigars, but for your broke-ass self in your shitty-ass studio, it’s a pretty relaxed-looking Founding Father looking up at you from your rough-hewn wood floor.  Washington usually has all the fun; it’s not every day that Ol’ B. Franklin gets thrown around behind closed doors by pretty girls.

As along as you keep your little casual tryst with Ben brief; it’s July 1 (happy Canada Day, folks!), and Ben’s not gonna be feeling so casual if he isn’t in your super’s hand by 5.

The overheard conversation between members of my parents’ generation has turned from Woodstock to strife with their neighborhood associations over paved front yards to stories of hurricane evacuations.  I sit across the dining room in Café Granada, the only other dining party not sitting outside in the sultry May air of New Orleans, and I almost have to physically bite my tongue so as not to blow my cover by correcting the rather vocal gentleman who is very sure that Hurricane Gustav occurred in 2007.  As it would happen, Hurricane Gustav (which in fact occurred in 2008) was a pivotal week for me in that it was the so-to-speak honeymoon during which my ex-boyfriend and I became an item, and the kickstart to what was probably the most important year of my college education.

But I digress.  The point here is that I love dining out by myself, partially because there is freedom in doing so (being neither obligated to split your dish nor to abstain from dessert or booze out of respect to your dining companions, etc.) and then also—and sometimes mainly—due to the fact that one can hear some pretty interesting stories from the next table over.

Lately, I find myself telling people how my parents led way more exciting lives when they were my age than I currently do.  It’s not that I’m complaining—I live in one of the most vibrant cities in the world, I am never in want of fascinating people with which to converse, and there is always a place that will provide me with a good old Wild Turkey OTR when necessity dictates, no matter the time of day or night. The flip side of these virtues is, of course, that they are often intertwined, meaning that usually when I go scrounging for the aforementioned Wild Turkey, I am also usually looking for some time alone; going to a bar alone, however, is pretty much asking for strangers to feel perfectly comfortable chattily inserting themselves into your personal bubble, no matter how tightly screwed-in your earbuds are or how verbally-constipated an expression you have composed onto your face in order to prevent such intrusions.

Having lived in our fine country’s booze capital long enough, I am starting to understand why my dad was so irritated when his little Napoleon House got written up as one of “New Orleans’ Best Kept Secrets” by, like, five national magazines—suddenly his little literary antisocial watering hole was being infiltrated by hordes of sloppy fanny-pack-donning tourists, orthopedic-surgery-convention delegates and their surgically-enhanced wives, or—worst of all—fellow attendees of his own convention, with whom he was suddenly obligated to jovially rehash all the details of the day’s events from which he had purposefully been attempting to escape.  In my relative proximity to my college years, I can perhaps compare this feeling to that of running into The Guy Who Could Kill You With Small Talk from That Class You Had To Suffer Through To Fulfill That Useless Graduation Requirement while trying to read Dürrenmatt in one of the B-school’s sleek, architect-pleasing Barcelona chairs in the fourth floor lobby.

Coffee shops and restaurants, however, tend to be more personal space-friendly than bars; owing, respectively, to their populations of frowny laptop-toters and to the unspoken understanding that it is rude to pester other diners or to table-hop when there are servers scurrying around with precariously-balanced dishes.

And thus have I arrived at my purpose for this blog.  I would like to introduce you, the reader, to the best places around this fine locale in which you can enjoy your solo time without being pestered.  And, being the worst walking case of undiagnosed ADD that I personally know, I can say with some amount of authority that the term “pestered” does not just apply to overly-chatty strangers who want to tell you personally about their plans to start a utopian community or the importance and social responsibility of feeding your hypothetical dog an organic vegan diet.  No, my friends: this is, in fact, an umbrella term which includes everything from odd looks from bored old men and/or judge-y hipsters to distracting music/wall art (or a similarly distracting lack thereof) to offensively inane and loud conversations overheard between sorority girls, etc., to prices that are distractingly incongruous with the quality of the food and drink which you are purchasing.

Distractions aside: before I close out this maiden post, I must add that I love Café Granada (located at 1506 S. Carrollton, New Orleans, LA 70118).  Seeing as this is a sort of restaurant review blog, they definitely deserve a shout-out for the certain je ne sais pas that I have always found about the place.  Whether I am here by myself drinking cava and noshing on my favorite dish, the clams Catalan, 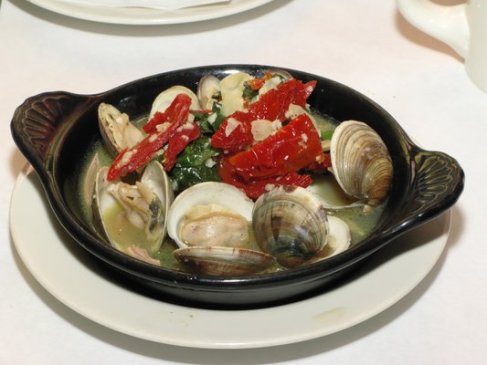 or I have my family in town and we want to grab a light dinner of tapas, or I am on a romantic date with my out-of-town beau (more cava, por favor!), I never leave this place without a certain sated glow about my person and a vow that I will indeed visit Alhambra before I turn thirty.  And it tends to be less busy than Lebanon’s next door (which is also an excellent choice and a favorite among Tulane/Loyola students and professors alike), so it is an uptown gem almost hidden in plain sight.  And it’s those very hidden gems that I intend to share with you.

Just so long as you promise not to bother me if you spot me nursing on a rocks glass and staring into the near-distance.  There’s someone out there who will listen to your manifesto; and if I were that person, I’d be sitting at Snake and Jake’s with a Schlitz and possibly a friend’s dog.  Just a thought.